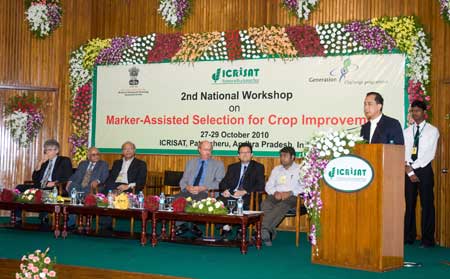 “High quality agricultural research is certainly part of the solution of world food security problems. There is an urgent need for more comprehensive and holistic solutions and integrated approaches that take changing needs and demands into account”, said Director General William Dar, setting the tone for the 2nd national workshop on marker-assisted selection.

In continuation of the 1st National Workshop of Accelerated Crop Improvement Programme (ACIP) of the Department of Biotechnology (DBT), Government of India held in New Delhi in December 2009, ICRISAT in collaboration with DBT and the CGIAR Generation Challenge Program hosted the “2nd National Workshop on Marker-Assisted Selection (MAS) for Crop Improvement” during 27-29 October, at the ICRISAT-Patancheru campus. Though the workshop was termed a “national” workshop, about 100 delegates from 19 different countries and ICRISAT’s sister centers (CIMMYT and IRRI) and AVRDC participated in the workshop. 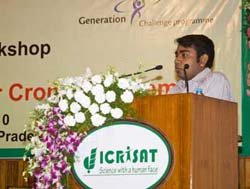 In his inaugural address, Dr Dar highlighted the CGIAR contributions in improving the livelihoods of poor, “But the question remains…” he continued, “How do we feed the already one billion hungry people in the world? And what about the projected 9.1 billion that will have to be fed by 2050!! Global agricultural production will need to grow by 70% by this time!” Referring to ICRISAT’s new strategic plan, Dr Dar said that biotechnology, including modern genomics technologies and MAS, are an integral part of the crop improvement program. He appreciated the efforts of DBT and the Generation Challenge Program in organizing this meeting. Dr Dar also recognized the role of ICAR in taking forward the results of ICRISAT to the national program, and acknowledged the help and support of leaders in genomics research, such as Professor Roberto Tuberosa from University of Bologna, Italy and Professor PK Gupta, Chair of ACIP-DBT.

Earlier, welcoming the delegates, DDG-R Dave Hoisington emphasized the need to have such meetings in India, which encourage the breeding community to integrate molecular tools in their breeding program. Professor PK Gupta expressed his happiness and thanked Director General Dar and ICRISAT for hosting the meeting. He outlined the objectives of the ACIP and mentioned that both DBT and he are hopeful of having some concrete recommendations, which DBT should be able to implement in their next call. Dr Swapan Datta, Deputy Director General-Crop Science, Indian Council for Agricultural Research (ICAR) highlighted the use of biotechnology tools (including both transgenesis and marker-assisted breeding) in crop improvement. Dr Datta assured the help and support of ICAR in crop improvement programs across the country.