The annual meeting of the BREAD (Basic Research to Enable Agricultural Development) projects was held at the Bill & Melinda Gates Foundation on 31 October – 1 November in Seattle, Washington, USA. Three projects under BREAD were called for a ‘pre-meeting’ session on 30 October which saw the presence of Mr Bill Gates, Co-chair of the foundation. 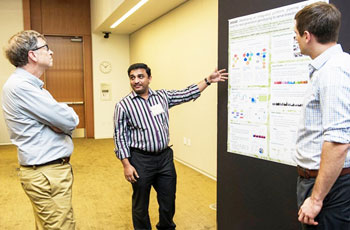 Dr Punna Ramu, Special Project Scientist at ICRISAT Patancheru, presented to Mr Gates the aim, developments, current status and capacity building of the on-going project on developing an integrated platform, pipeline, and analytical tools for next generation genotyping to serve breeding efforts in Africa. The project is led by Cornell University, USA with ICRISAT (sorghum), International Maize and Wheat Improvement Center (CIMMYT) (maize) and the University of South Carolina, USA as collaborators. BREAD projects are co-funded by the National Science Foundation (NSF) and the Gates Foundation.

Dr Geoff Morris, collaborator from the University of South Carolina, USA, presented the case studies of association mapping of agroclimatic traits and flavonoid traits in sorghum using genotyping-by-sequencing (GBS) technology which were published in PNAS and G3 journals.

In just two years, GBS technology has been adopted in more than 150 species (plants and animals) and genotyped more than 200,000 lines for various applications. Mr Bill Gates appreciated the broader adaptability of the technology in such a short period of time.

In 2013, ICRISAT in collaboration with Cornell University organized two training courses on utilization of GBS technology in crop improvement programs, one at ICRISAT Patancheru and another at ICRISAT-Nairobi. The project is being undertaken under the CGIAR Research Program on Dryland Cereals.