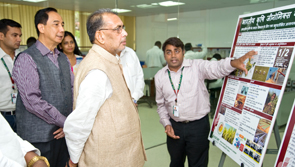 “Taking technologies that are ready to the doorstep of every smallholder farmer in the country is a priority for the Union Government. With support from ICRISAT and other agricultural institutions, we will reach out to more farmers in rural India,” said Radha Mohan Singh, Union Minister for Agriculture.

The honorable minister while on a visit to the headquarters of ICRISAT in Patancheru, Telangana, India, on 23 June, was highly appreciative of the institute’s farmer-participatory integrated watershed management model.

“We must improve the health of soil to the benefit of smallholder farmers. I urge ICRISAT to upscale plans to extend soil health cards to every farmer in the country,” the minister added.

Recognizing the importance of pulses in enhancing food security and incomes of smallholder farmers, the minister discussed with ICRISAT, the Union Government’s priority of upscaling cultivation of pulses and making it more competitive and attractive to farmers. He pledged additional support to the efforts of ICRISAT to enable a Pulses Revolution in India. 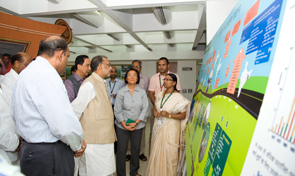 With the Markets, Institutions and Policies team.

ICRISAT Director General Dr William D Dar, Deputy Director General-Research Dr CLL Gowda and other members of the senior management team, briefed the minister on the various research programs at the institute. While visiting the ICRISAT Centre of Excellence in Genomics, the Director General shared with the Minister the idea of an India Genome Centre for Agriculture which has the potential to transform India into a global leader in genomics. The initiative focuses on areas critical to food security and aims to coordinate the work of all the genomics institutes across the country. 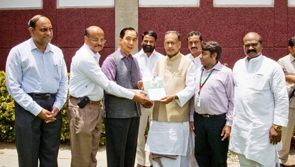 Dr WD Dar and CLL Gowda presenting an information folder on the India Genome Centre for Agriculture to the minister.

Enhanced support to value chains of nutri-cereals like sorghum and millet which have been traditional crops in most areas across the country is essential. With high nutritional composition and resilience to survive in dry areas, nutri-cereals will be critical to India’s future helping overcome malnutrition and to cope with climate change. ICRISAT has been working closely with several organizations in the country on sorghum and millet but, recognizes the need for new intensified efforts to promote them robustly at the consumer level. ICRISAT’s plans for a farmer-centric rainwater harvesting model were also detailed to the minister, while viewing a 3-D model of how watershed management benefits farming.

Minister RM Singh also toured the Center of Excellence in ICT Innovations for Agriculture and the RS Paroda Gene Bank and interacted with the scientists. 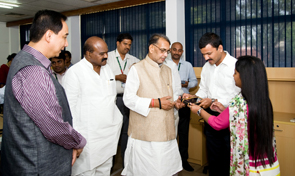