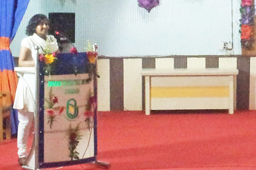 Dr P Janila during her presentation.

ICRISAT’s approaches in groundnut breeding and progress made through the adoption of integrated molecular breeding was presented at the All India Co-ordinated Research Project on Groundnut (AICRP-G) workshop held at the Junagadh Agricultural University, Junagadh, Gujarat on 15-17 April.

Also during the workshop, two ICRISAT-bred groundnut varieties – CTMG-6 (ICGV 05049) and ALG-060320 (ICGV 94118) – have been proposed for identification by State Agricultural Universities. Identification is a prerequisite for the release of a variety in India.

About 100 scientists from across Institutes of the Indian Council of Agricultural Research (ICAR) and State Agricultural Universities participated in the workshop.