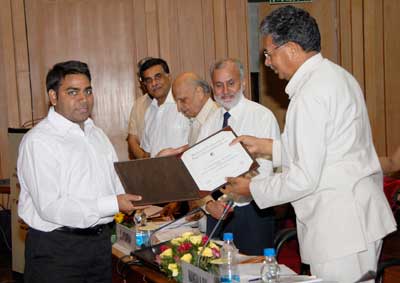 Rajeev Varshney received yet another important recognition from the National Academy of Agricultural Sciences (NAAS), India, in the form of Foreign Fellow, for his outstanding and cutting-edge-contribution in the area of crop genomics and biotechnology. His work on development of large-scale genomic resources such as the first set of genetic maps, molecular markers, and transcript sequences for legume crops has been recognized by NAAS, leading to the fellowship.

NAAS, established in 1990, has a vision to gain recognition as a credible Think Tank to provide views of the scientific community on all agriculture-related policy issues, to encourage talent and promote excellence in science, making it a powerful instrument for the growth of national economy with a vibrant farm sector. The academy has a total of 497 fellows, which includes 45 Foreign Fellows and one Corporate Fellow.

Aged 36, Varshney has become the youngest fellow of the academy. Recall that he was awarded Associateship of the academy in 2008 and received important awards/honors from other science academies of India such as the Indian National Science Academy (Young Scientist Award-2008) and the National Academy of Sciences, India (Young Scientist Platinum Jubilee Award-2007).

While congratulating Varshney for this important achievement, Director General Dar said, “You deserve this recognition. You are not only bringing honor to yourself and your family but also to ICRISAT.”

Similarly, Pratap Singh Birthal was also conferred a NAAS fellowship for his contributions in the area of agricultural economics and policy. Birthal was instrumental in the formulation of the new buffer stock policy of the Government of India, which is being used to maintain stocks of food grains for national food security and social safety-net programs. He has made a pioneering contribution in setting research priorities of the livestock sector for poverty alleviation and reducing environmental degradation.

Both the scientists presented their fellowship work and were inducted into the Academy during Foundation Day and the 17th Annual General Meeting of NAAS on 5 June. They received the fellowships from Dr Mangala Rai, President, NAAS and Dr S Ayyappan, Vice-President of NAAS and Director General, ICAR (incidentally, former and present Vice-Chairmen of our Governing Board).

Team ICRISAT congratulates Rajeev and Birthal for these outstanding recognition!