A high-level delegation from Shandong Academy of Agricultural Sciences (SAAS), China signed a Memorandum of Understanding (MoU) with ICRISAT to foster collaborative research on peanut.

China and India are the two largest producers of peanut in the world. Shandong is the largest peanut growing province in China. ICRISAT has been collaborating with the Shandong Peanut Research Institute (SPRI) since several years. The visit by Dr Rajeev K Varshney, Research Program Director – Grain Legumes to SPRI in June 2013 catalyzed this visit by the delegation. 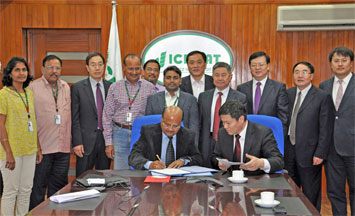 During the signing of the MoU. Photo: B Anjaiah, ICRISAT