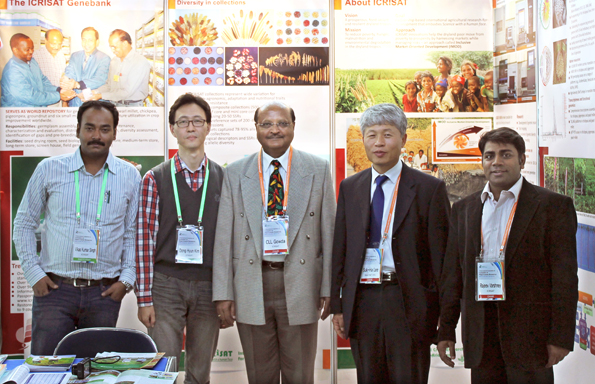 The world’s population is projected to reach 10 billion by the year 2050, which will require a 70-100% increase in food production amid the effects of climate change that threaten food security across the globe. New scientific tools like genomics of plant genetic resources are the world’s best option to meet the food production requirement in the next 40 years.

“With the rapid advancement of genomics research, gene sequences should be available hopefully in the next 3-4 years for all plant species of economic importance. But the most important challenge to the scientific community will be to utilize these gene sequences and genome sequence diversity for crop improvement for food security, as well as for conserving biodiversity,” emphasized Dr CLL Gowda, Program Director – Grain Legumes, in the inaugural address he delivered on behalf of Director General William D. Dar at the 3rd International Symposium on Genomics of Plant Genetic Resources (GPGR3).

Tackling the challenges of addressing global food security today and in the future, GPGR3 is being held this week, 16-19 April, in Jeju Island, South Korea. 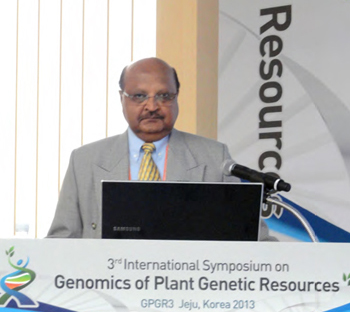 ICRISAT, in the last two years, has led a global research team in completing the genome sequencing of chickpea and pigeonpea, two important legume crops and major protein sources of the poor in the dryland tropics. “By the end of 2014, we should have genome sequenced all of our mandate crops (groundnut, pearl millet and sorghum, in addition to chickpea and pigeonpea). Not only this, we have challenged the ICRISAT genomics scientists to generate genome variation maps after sequencing several hundred lines in each of these crops,” Dr Gowda added.

During the inaugural session also chaired by Dr Gowda, the work and contributions of Dr Gebisa Ejeta, plant breeder-geneticist, World Food Prize winner and a former ICRISAT scientist, were recognized.

Dr Hari Upadhyaya, Head of Genebank and Dr Rajeev Varshney, Director, Center of Excellence in Genomics (CEG) co-chaired the “Genomics of genebank” workshop, which had presentations from CGIAR and national programs. During the session, Dr Upadhyaya presented the ICRISAT genebank activities, particularly on genomic tools for germplasm characterization.

Dr Varshney chaired the session on “Toward reference genome for crop plants”, where he also delivered a presentation on “Genome sequence information for crop improvement in chickpea (Cicer arietinum) and pigeonpea (Cajanus cajan)”. Dr Dong Hong Kim (Post-doctoral Scientist) presented a poster on “Analysis of 96 Rhizobial sequence from chickpea nodules by whole genome sequence” while Dr Vikas Kumar Singh (Special Project Scientist) presented a poster on “Development of first multi-parent advanced generation inter-cross (MAGIC) population in pigeonpea (Cajanus cajan)”. ICRISAT’s exhibition booth as one of the conference sponsors maps out the programs and activities of the institute’s Genebank and CEG.