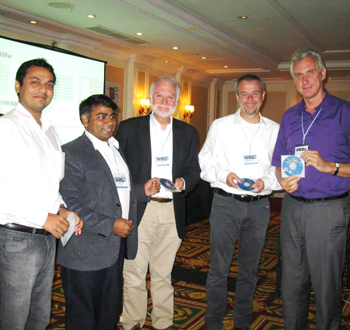 Invited by GCP for an update on the CGIAR Research Program on Grain Legumes and on Dyland Cereals were respective Directors, Drs Noel Ellis and Shoba Sivasankar, who explained the integration of GCP products into both programs.

Drs Varshney and Abhishek Rathore also gave an update on the functioning of ICRISAT’s Integrated SNP Mining and Utilization (ISMU) pipeline and Genomic Selection modules integrated in ISMU version 2. Dr Pooran Gaur (for chickpea) and Dr Patrick Okori (for groundnut) discussed and defined the Genomics and Breeding products as part of the GCP initiative.

Over 100 delegates from all over the world attended GRM-2013. The GCP also convened a Consortium Committee (CC) meeting on 29 September and Stakeholders’ meeting on 1 October. These were attended by committee members and about 30 representatives from several CGIAR Centers, foundations, national programs, regional organizations and universities, with Dr Varshney representing ICRISAT. The discussions centered on planning the next phase of the Integrated Breeding Platform (IBP), hosting IBP phase II, and the setting up of Regional Hubs across Asia, sub-Saharan Africa, and South America. In consultation with Dr Stefania Grando (Director, Research Program – Dryland Cereals) and with support from the ICRISAT leadership, Dr Varshney proposed ICRISAT’s interest in hosting the Regional Hub for South Asia at the Institute.