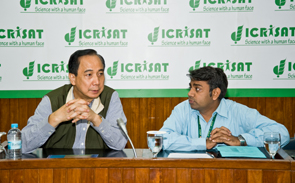 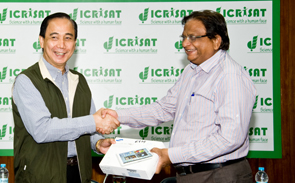 With an objective to enhance the precision and efficiency in breeding programs in more effective manner, the ICRISAT Research Program on Grain Legumes has initiated “digitalization” of crop breeding.

Congratulating the scientists and managers of the Program, ICRISAT Director General William Dar said, “We are marking today the transition of ICRISAT’s breeding program to the next level. We are going away with tools of the past and embracing the tools of the digital age. It is very important for us at ICRISAT, as the lead center of the CGIAR Research Program on Grain Legumes and on Dryland Cereals, to enhance genetic gain in the breeding programs of our mandate crops and other partners by embracing modernization of breeding programs,” he added.

Dr Dar also stated that “Integrating three ecosystems (genomics, phenomics and bioinformatics) is the need of the hour to take crop improvement programs to the next level.”

Dr Rajeev Varshney, Research Program Director – Grain Legumes, said, “These days breeding is not a solitary discipline, it has become an interdisciplinary science. Modern breeding includes other allied disciplines such as phenotyping science that includes physiology, entomology, pathology; genome biology that includes genomics and genetic engineering and informatics analysis that comprises biometrics and bioinformatics together with classical breeding.”