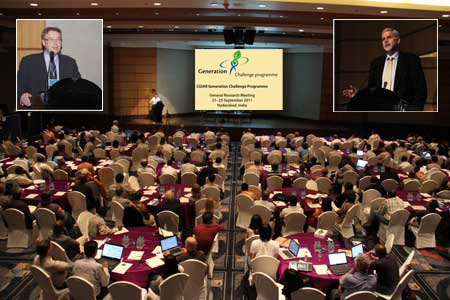 Access to improved crops is a critical tipping point between healthy and hungry families. By using advances in molecular biology and harnessing the rich global stocks of crop genetic resources, the Generation Challenge Programme (GCP) aims to bridge this gap by creating and providing a new generation of plants that meet the needs of resource poor farmers.

About 172 scientists from 40 countries are attending the GCP – General Research Meeting Phase II at Hotel Marriott in Hyderabad on 21-25 September. This global event has participants from various institutes and Principal Investigators from ongoing GCP projects sharing their research results and jointly planning for the incoming year.

Elaborating on the importance of the GRM in his opening remarks, GCP Director Jean-Marcel Ribaut said, “This is the first time that all the GCP Research Initiatives will be jointly reporting progress. The second phase of the project will see more projects being led by user country partners while developed country partners take a back seat as mentors and collaborators.” Thanking ICRISAT for hosting the event, he emphasized the Institute’s role as a valued GCP partner and one of the 18 GCP consortium members.

Phase I (2004–2008) of the GCP had a thematic approach and worked on 18 crops. Phase II (2009–2013) has adopted a more complementary approach and shifted focus to improving the drought tolerance of nine key crops. Research Initiatives covering the nine crops were launched in 2010 and cover comparative genomics for three cereals (maize, rice and sorghum).

Participants of the GCP GRM being held in Hyderabad.

Meanwhile, Dr Swapan Datta, Deputy Director General, Indian Council of Agricultural Research (ICAR) said India should give high priority to the project as the future of agriculture is based on science and technology.

Professor D Pental, Former Vice-Chancellor, Delhi University in his keynote address elaborated on the mustard improvement program led by his group and emphasized the importance of “open source” germplasm and pre-breeding activities. He praised CGIAR Centers for their contribution to crop breeding in developing countries.

“The GCP and its partners have demonstrated the role of genomics in germplasm characterization and in shortening the breeding cycle. NARS partners need to be motivated and encouraged to use these approaches in their breeding programs,” said Dr Rajeev Varshney, Principal Scientist, Applied Genomics, ICRISAT and Theme-I leader of GCP.