CEGSB proposes to monitor the impact of dietary protein composition on the gut microbiome using metagenome sequencing in malnourished children. Our specific focus is on the impact of our mandate crops as food. Our assumption is that dietary protein to carbohydrate ratio alters gut microbiota compositions. We expect to observe gene networks for weight maintenance, metabolism and differential dietary impacts in high protein low carbohydrate fed versus low protein high carbohydrate fed children. In this manner, we will be generating information on metabolic phenotypes that reflect several functions encoded in human genomes and gut microbiomes. This knowledge will enable us to modulate gut microbiomes using legume-based nutritional intervention approaches and to provide an alternative therapy for malnutrition in the near future. This research will be undertaken together with several collaborators from China, UK, Denmark and India. 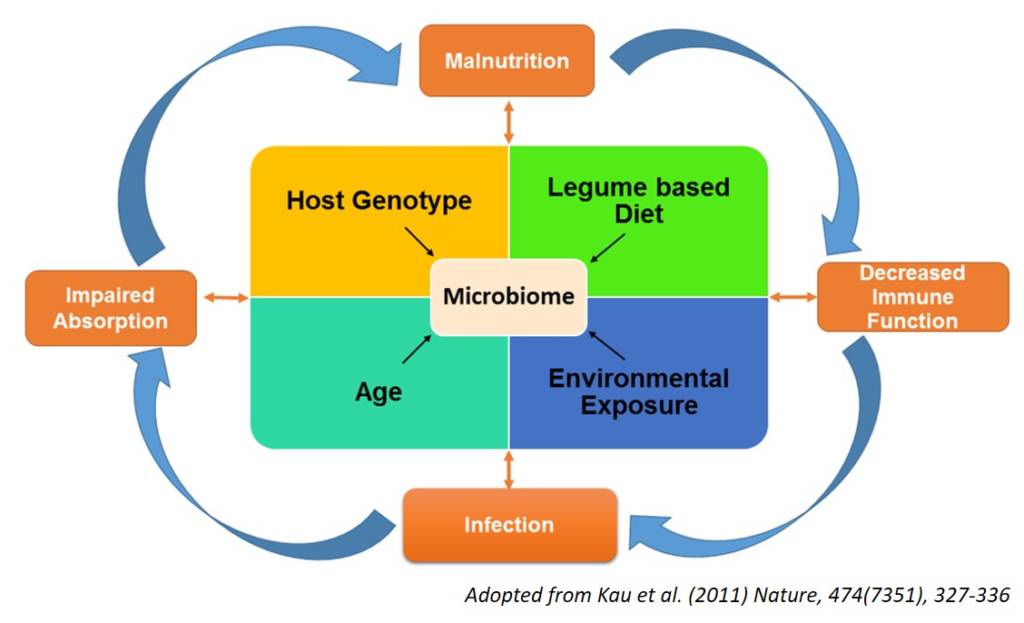 Relationship between Legume protein, malnutrition and the intestinal microbiome.

It is also important to mention that nutritional profiling of 300 chickpea lines of reference set has been initiated at ICRISAT to explore the variability of various nutrients such as protein, minerals and vitamins. The amino acid composition and digestibility of proteins, which are influenced by its source and amount of intake, play a pivotal role in determining the microbiota. Nutritional profiling would allow selection of lines with high protein content that would further be used for studying the impact of dietary protein on gut microbiota and ultimately on human health. ICRISAT Theme – Markets, Institutions, Nutrition and Diversity (MIND), National Institute of Nutrition, India and others will play an important role to provide inputs and design the study.