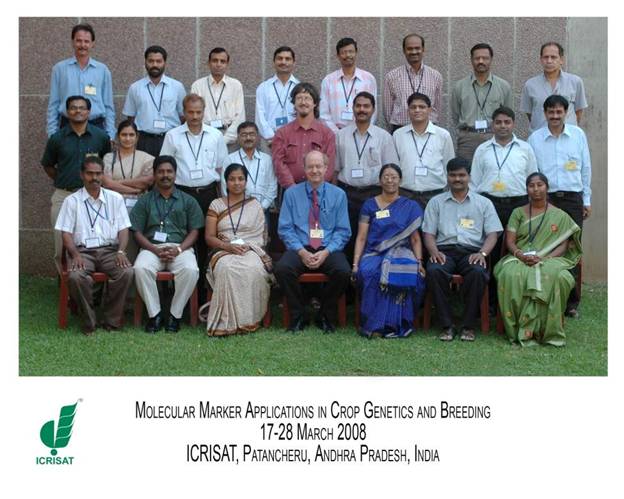 The Center of Excellence in Genomics (CEG), supported by the Department of Biotechnology, Government of India, hosted its first training course entitled “Molecular Marker Applications in Crop Genetics and Breeding” during 17 to 28 March 2008. The course was offered at the request of Dr Mangala Rai, Director General of Indian Council for Agricultural Research (ICAR), who plans to see that the majority of the ICAR breeders receive training in the application of molecular tools in breeding. Sixteen scientists from various ICAR institutes, State Agricultural Universities, and researchers from the ICAR supported Regional Research Stations participated in this first training course. The training course exposed the participants to the analysis and interpretation of molecular marker data that can now be supplied by a Genotyping Service Lab, such as the one housed in the CEG. The two weeks consisted of lectures, laboratory practicals, field visits and practice sessions using the specialized computer software for data analysis. During the graduation ceremony on 28 March 2008, each participant was presented a certificate by Drs William Dar, Director General, ICRISAT; N Seetharama, Director, National Research Center for Sorghum, Hyderabad; and Dave Hoisington, Global Theme Leader-Biotechnology. ICAR provided the travel cost for the participants.

The comments received from the participants for both of above courses indicated their great appreciation for the CEG in offering the courses, and one person commented that this was the first course where he was able to learn that he could actually “use” molecular markers in his program without having to “do” the marker technology.