Training in molecular markers strengthens capacity of partners in ESA

Striga hermonthica infests cereal-based cropping systems in many parts of sub-Saharan Africa. Efforts to manage the weed have led to control options and now the biology of the weed, the mechanisms of resistance and the effects on the host plants are much better understood. 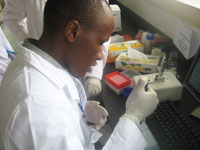 With a view to providing an extensive theoretical background on the use of molecular markers in crop improvement, with a focus on Striga and sorghum, two training workshops were recently conducted in Nairobi at ILRI/BecA on 25-30 July and 1-5 August.

The first was supported by ASARECA in collaboration with the African Biodiversity Conservation and Innovation Centre (ABCIC), which is led by former ICRISAT scientist Dr Dan Kiambi. The second workshop was funded by the BBSRC-SARID project in collaboration with Prof Julie Scholes of Sheffield University.

Conducted by ICRISAT scientists Santie de Villiers, Santosh Deshpande, Henry Ojulong and McDonald Jumbo, together with Dan Kiambi and Julie Scholes, the courses focused on sorghum as a crop and on understanding and mitigating Striga infestation as a biotic constraint to productivity. Both courses were attended by about 14 scientists from the region, including Sudan, South Sudan, Ethiopia, Rwanda, Uganda, Tanzania, Malawi, Zambia and Kenya. 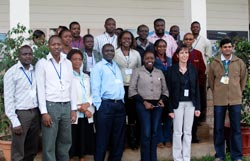 We vow to eradicate Striga, say these enthusiastic trainees at the courses held in ILRI/BecA at Nairobi.

The complexity of the parasite and the progress made at Sheffield University on phenotyping systems to study Striga attachment and resistance mechanisms were discussed. Participants were exposed to and trained in laboratory procedures for leaf sample preparation and shipment, DNA extraction, DNA quantity and quality tests, electrophoresis and SSR genotyping. They also gained insights into marker-assisted trait introgression, and genotyping data analysis using PowerMarker and DARwin, and were introduced to QTL mapping. The latest developments and technologies available for genotyping and genomics were also discussed.