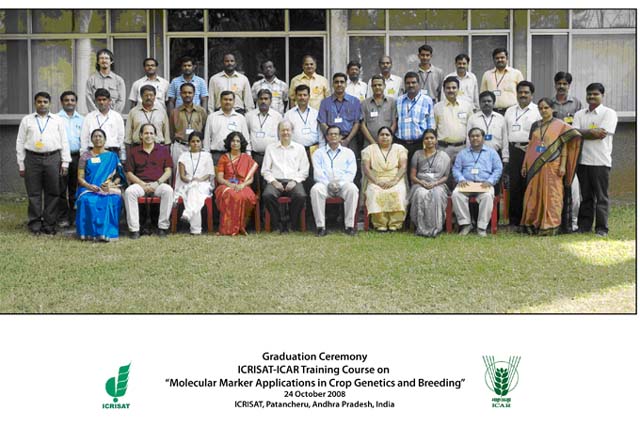 The Center of Excellence in Genomics (CEG) at ICRISAT, Patancheru successfully completed a three-week training course, Molecular marker applications in crop genetics and breeding, 6-24 October 2008. This is the third training course that CEG offered, exclusively to the second batch of scientists from the institutes of the Indian Council of Agricultural Research (ICAR). The CEG is offering the molecular marker applications course to ICAR scientists at the request of Dr Mangala Rai, Director General of ICAR, who wants the ICAR breeders to be trained in the application of molecular tools in breeding. Twenty-one scientists from various ICAR institutes, state agricultural universities and ICAR-supported regional research stations participated in this course.

The course provided the participants a hands-on opportunity to gain expertise in the use of molecular markers in crop breeding, gene/QTL mapping and marker-assisted breeding. The course focussed on the experimental design and data analysis components of molecular markers, rather than the actual marker data generation technology. The participants were given lectures on marker technology and were able to see how the various marker data is generated. Special attention was given on the requirements for scientists to utilize a high-throughput marker service facility such as the one at the CEG (e.g., DNA extraction and quality control). In addition to ICRISAT/CEG scientists we have two resource persons Dr. Jorge Franco Durán, Department of Biometrics, Statistics and Computation, Faculty of Agronomy, Universidad de la República, Paysandú, Uruguay, and Dr Michel Ragot, Head, Genetic Information Management, Syngenta Seeds, France.

The course concluded with the Graduation Ceremony on 24 October in which the participants received certificates from Dr N Seetharama, Director, National Research Center for Sorghum, Hyderabad (and Nodal Officer, ICAR) and Dr Dave Hoisington, Deputy Director General – Research. On behalf of ICAR, Dr Seetharama thanked ICRISAT for organizing this training course. He strongly encouraged the participants to follow-up on this course after going back to their institutes. Dr Hoisington appreciated the hard work of the participants and emphasized the value of the training course in enhancing the skills of our partners in India. Earlier, while interacting with the course participants during on 21 October, ICRISAT Director General Dr William Dar mentioned that he doesn’t consider this as a training course but sees it as a capacity building exercise of ICRISAT’s partners. He acknowledged the support and vision of Dr Mangala Rai to strengthen the molecular breeding program of ICAR. The participants thanked ICAR and ICRISAT-CEG for having provided them with this useful training. Dr Rajeev Varshney, Coordinator of the course thanked the DG and the DDG-R of ICRISAT for their support and encouragement as well as the DG-ICAR and Dr Seetharama for their help and cooperation in selecting the participants. He appreciated the hard work and contribution of several colleagues from ICRISAT including M/s Tom Hash, S Senthilvel, T Nepolean, Abhishek Rathore, Jayashree B, HD Upadhyaya, BVS Reddy, KN Rai, Rakesh Srivastava, Barry Shapiro and two guest faculty members Jorge Franco and Michel Ragot. In his concluding remarks, Dr Varshney appreciated the efforts and patience of the participants and encouraged them to develop research proposals after returning to their institutes. He assured the participants of support from ICRISAT-CEG to enable them to undertake molecular breeding in their crop improvement programs.