Participants trained: 20 including 2 Asian participants who were self-supported 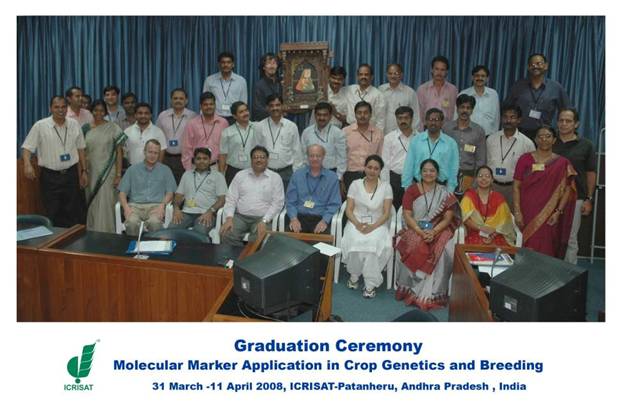 The Center of Excellence in Genomics (CEG), supported by Department of Biotechnology, Government of India offered its second training course entitled “Molecular Marker Applications in Crop Genetics and Breeding” at ICRISAT for CEG participants during 31 March to 11 April 2008. The two-week course was designed, organized and offered by a group of ICRISAT/CEG scientists with the help of Dr. B.M. Prasanna, IARI, New Delhi. The course was announced through CEG website and DBT Newsletter.

We received about 500 applications submitted on-line and through hard copies for this course. The selection committee selected 20 candidates including 2 Asian participants who were self-supported. Transport to/from ICRISAT, room and board, and all training costs were provided to the selected participants from India through funds provided by the project.

The course provided the participants a hands-on opportunity to gain expertise in the use of molecular markers (SSRs, SNPs and DArTs) in diversity analysis, gene/QTL mapping and marker-assisted breeding. The course focussed on the experimental design and data analysis components of molecular markers, rather than the actual marker data generation technology. The participants were given lectures on marker technology and were able to see how the various marker data is generated. Special attention was given on the requirements for scientists to utilize a high-throughput marker service facility such as the one at the CEG (e.g., DNA extraction and quality control). In addition to ICRISAT/CEG scientists we have two resource persons Dr. Jorge Franco Durán, Department of Biometrics, Statistics and Computation, Faculty of Agronomy, Universidad de la República, Paysandú, Uruguay, and a former Monsanto Consultant Dr Xavier Delanny, a MARS specialist from USA.

The highlight of this course is presence of Dr Mohd Aslam, Director, Department of Biotechnology, Government of India, who was here on 11 April 2008 for Graduation Ceremony and presented the trainees with a certificate.