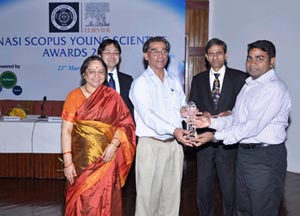 Rajeev Varshney received the prestigious NASI-Scopus Young Scientist Award for 2010 for his dedicated research contribution in agriculture. He was honored at an awards ceremony held at the National Institute of Immunology, New Delhi, on 21 March.

Rajeev was among 11 topnotch scientists who received the award in various fields namely, Agriculture, Biological Sciences, Medicine, Physics, Chemistry, Engineering, Earth and Oceanographic and Environmental Sciences. Each award carries a trophy, a citation and a cash prize of 50,000.

“A big congratulation to Rajeev! He has made Team ICRISAT proud,” said ICRISAT DG William Dar in his congratulatory message to Rajeev.

The annual award was instituted five years ago by the National Academy of Sciences, India, (NASI) and Scopus, the abstract and citation database of the peer-reviewed scientific literature of Elsevier, the Amsterdam-based publisher of scientific, technical and medical information products and services. Applicants were evaluated in two stages by 48 panelists, based on criteria such as publication output, citations and other metrics based on Scopus data as well as research quality and impact.

Secretary of the Department of Science and Technology, GoI, T Ramasami presented the awards and acknowledged the effort of NASI and Scopus in spotting and encouraging scientific talent in India.