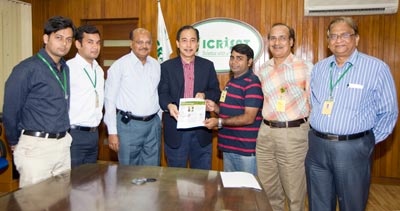 Once referred to as an “orphan crop” mainly grown by poor farmers, pigeonpea is now set to join the world’s league of major food crops with the completion of its genome sequence.

The completed genome sequence of pigeonpea was featured as an advance online publication on 6 November 2011 on the website of the journal Nature Biotechnology, the highest ranked journal in the area of biotechnology. The paper provides an overview of the structure and function of the genes that define what makes a pigeonpea plant. It also reveals valuable clues on how the genomic sequence can be useful to crop improvement for sustainable food production, particularly in the marginal environments of Asia and sub-Saharan Africa.

Years of genome analyses by a global research partnership led by ICRISAT have resulted in the identification of 48,680 pigeonpea genes. A couple of hundred of these genes were found unique to the crop in terms of drought tolerance, an important trait that can be transferred to similar legume crops like soybean, cowpea or common bean that belong to the same family.

In the fight against poverty and hunger amid the threat of climate change, highly nutritious, drought-tolerant crops are the best bets for smallholder farmers in marginal environments to survive and improve their livelihoods.

Pigeonpea, grown on about 5 million hectares in Asia, sub-Saharan Africa and South-Central America, is a very important food legume for millions of the poor in the semi-arid regions of the world. Known as the “poor people’s meat” because of its high protein content, it provides a well-balanced diet when accompanied with cereals. 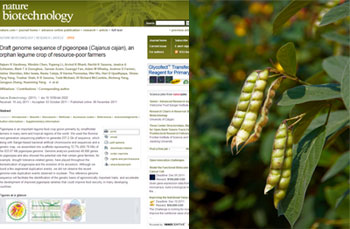 “The mapping of the pigeonpea genome is a breakthrough that could not have come at a better time. Now that the world is faced with hunger and famine, particularly in the Horn of Africa, brought about by the worst drought of the decades, science-based, sustainable agricultural development solutions are vital in extricating vulnerable dryland communities out of poverty and hunger for good,” says Director General William Dar.

“Modern crop improvement technologies for smallholder farmer crops such as pigeonpea will be crucial to speed up the development of improved varieties that can provide high yields and improved livelihoods, and at the same time meet the challenges of marginal environments and the threat of climate change and scarce natural resources,” adds the Director General.

Rajeev Varshney, the lead scientist and coordinator for the pigeonpea genome sequencing project explains how this breakthrough will unlock pigeonpea’s potential.

“Having the pigeonpea genome sequence as a reference will significantly speed up and reduce the cost of screening the ‘good genes’ within the stored pigeonpea seed collections in genebanks like that of ICRISAT. This also means dramatically reducing the cost of developing new improved varieties for farmers,” says Varshney.

“At the moment, in general, it can take 6-10 years to breed a new variety. With the use of this genome sequence data, in the future, we could be breeding a new variety in just about 3 years,” he adds.

According to Professor Huanming Yang, Chairman of BGI-Shenzhen, the world’s largest genomics institute and a key partner of this project, “the pigeonpea collaboration with ICRISAT is a milestone in the partnership between India and China, showcasing the excellent working dynamics and understanding among Indian and Chinese genomics scientists. I hope more partnerships like this will be established in the future, and I believe this will surely bring a significant difference to the whole world.”

India is the largest producer of pigeonpea, but crop productivity in the country, as well as in sub-Saharan Africa, is only less than 1 ton per hectare. An improved understanding of the pigeonpea genome will have a major impact on improved crop productivity, tackling pests and disease constraints in production, and improved resistance to harsh environments and the future variable climate.

Pigeonpea is the first “orphan crop”, the first “non-industrial crop” and the second food legume (after soybean) with a completed genome sequence.

It is also the first time that a Consultative Group on International Agricultural Research (CGIAR)-supported Center like ICRISAT has led the genome sequencing of a food crop.

The sequencing was accomplished by a global research partnership, the International Initiative for Pigeonpea Genomics (IIPG), led by ICRISAT with partners such as BGI –Shenzhen (China), US research laboratories like University of Georgia, University of California-Davis, Cold Spring Harbor Laboratory, and National Centre for Genome Resources, European research institutes like the National University of Ireland Galway and also support from the CGIAR Generation Challenge Programme, US National Science Foundation and in-kind contribution from the collaborating research institutes.

For the full article at Nature Biotechnology, please check the link: http://www.nature.com/nbt/journal/vaop/ncurrent/abs/nbt.2022.html.