Legumes, known as “food for all” as they represent a healthy and affordable dietary source for all types of people, rich or poor, are the subject of a big, international scientific conference here in Hyderabad.

The 6th International Conference on Legume Genetics and Genomics (VI ICLGG) hosted by ICRISAT and the Indian Council of Agricultural Research (ICAR) opened on 2 October, bringing together more than 500 delegates from 44 countries, representing different disciplines of legume biology. The conference is part of a series of earlier ICLGG conferences held in the US (twice), France, Australia and Mexico, and is the first to be organized in Asia.

“The use of modern crop improvement technologies for grain legumes will be crucial to speed up the development of improved varieties that can provide high yields and improved livelihoods to smallholder farmers and at the same time meet the challenges of harsh environments and the threat of climate change,” Dr Dar added.

Dr Swapan Datta, Deputy Director General (Crop Science) of ICAR, highlighted the role of legume crops in India’s food security. “Our country is the world’s largest producer and consumer of several legume crops, yet it is still a major importer of these crops,” said Dr Datta. The conference, he added, is of great significance for India in improving its domestic supply and in meeting the demand by 9% to 26% in the coming years using genomics-based modern science in legume breeding. 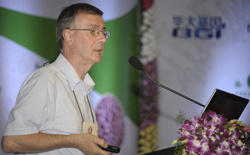 In his inaugural lecture, Dr Rick Dixon, Senior Vice President and Plant Biology Division Director of Noble Foundation, highlighted the importance of understanding the basic phenomenon of legume biology and presented an example of harnessing genomics in improving Lucerne, a forage legume crop. Dr Dixon is a Member of the National Academy of Science, the world’s most prestigious science academy.

“High quality science needs to be translated into crop improvement,” said Dr Rajeev Varshney, Director of ICRISAT’s Centre of Excellence in Genomics and the Conference Chair. ICRISAT together with national partners such as ICAR has played a critical role in releasing several hundred improved varieties and hybrids of legumes in many developing countries of Asia and Africa. ICRISAT has also started to decode the genomes of legume crops that will enhance precision and efficiency of breeding programs. For instance, last year, ICRISAT scientists together with partners from more than 10 organizations worldwide completed the genome sequencing of pigeonpea published in Nature Biotechnology, the highest impact factor journal in the area of biotechnology. ICRISAT, together with 11 major partners, is also presently leading the CGIAR Research Program (CRP) on Grain Legumes.

A total of 62 talks and 293 poster presentations will be delivered in 13 sessions during the conference. VI ICLGG is expected to provide an outstanding forum to stimulate ideas and establish collaborations as well as to initiate intense discussions about future innovations and directions in the basic and applied fields of legume biology. The conference will conclude on 7 October.