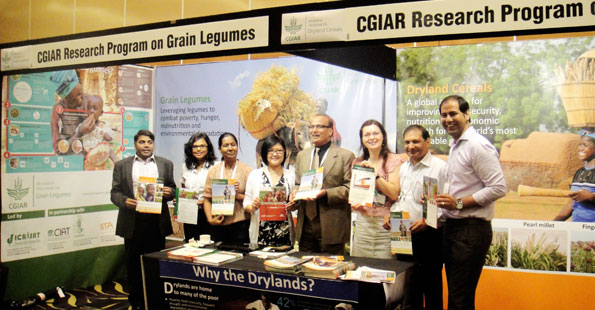 The ICRISAT delegation attending the InterDrought-IV Conference in Perth, Australia, at the exhibit booth of the CGIAR Research Program on Grain Legumes and on Dryland Cereals. Photo: ICRISAT

Great advances have been made in recent years in understanding the molecular basis of plant responses and plant tolerance to drought stress. However, there is a huge gap in the application of knowledge towards solving issues at the farm level in order to advance practical solutions to drought-prone farming. The InterDrought IV conference held in Perth, Australia on 2-6 September offered a unique and timely platform for deliberation among disciplines in public and private research sectors to meet this gap.

ICRISAT made a strong scientific presence at the InterDrought IV conference, with a delegation of scientists and researchers presenting scientific and technological innovations and applications to crop improvement and crop management under drought-prone agriculture.

InterDrought IV, hosted by Murdoch University with multi-sponsorships globally led by the Grains Research & Development Corporation (GRDC) and the CGIAR Generation Challenge Programme (GCP), was especially concerned with the poorer developing countries that face an increasing problem of food production with less water and under increasingly drought-prone conditions. A number of world renowned speakers presented their scientific achievements at the conference, with a range of themes addressed throughout the program.

Members of the ICRISAT delegation, while each presenting their respective scientific innovations, spoke collectively of the Institute’s priority to find ways to help extricate vulnerable drought-prone communities out of hunger and poverty using science-based solutions and pro-poor approaches to drought adaptation. 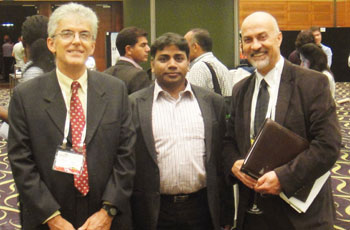 Leading the ICRISAT delegation was Dr Rajeev K Varshney, Director, Research Program – Grain Legumes (RP-GL), also a member of the Program Committee of the conference. In his paper on “Genomics-assisted breeding for drought tolerance of chickpea,” he highlighted the importance of using genomics in developing superior lines with enhanced drought tolerance of chickpea, a major grain legume crop for the poor. Dr Vincent Vadez, Assistant Director, Research Program – Dryland Cereals (RP-DC), presented a paper on “Transpiration efficiency: New insights on an old story,” stressing the importance of producing more food per unit of water through transpiration efficiency or the genetic component of water-use efficiency in different crops.

Dr Jana Kholova of RP-DC, spoke on “Modelling traits related to stay-green phenotype in post-rainy season sorghum,” while Dr Manish Roorkiwal of RP-GL, presented a paper on “Genetic architecture of drought and heat tolerance in chickpea through genome-wide and candidate gene-based association mapping.”

Complementing ICRISAT’s active participation at the InterDrought IV, the CGIAR Research Program on Grain Legumes and the CGIAR Research Program on Dryland Cereals – both led by the Institute – were featured as exhibitors at the venue. The Grain Legumes and Dryland Cereals double booth served as an effective platform for active interaction and engagement among ICRISAT staff, partners and conference participants. 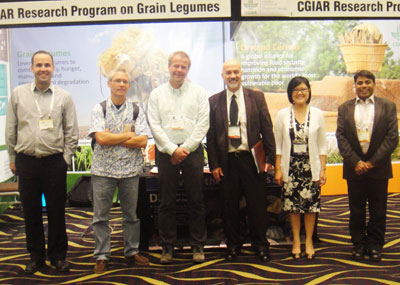 Banking on ICRISAT’s work in coping with drought in agriculture particularly in the semi-arid tropic regions of the world, and with its strong research for development partnerships and alliance worldwide and international visibility of research work, Dr Varshney was selected, after winning the bid, to host the next InterDrought conference on behalf of ICRISAT and the Indian Council of Agricultural Research (ICAR). InterDrought I (ID-1)was organized in 1995 in France, ID-II in 2005 in Italy, ID-III in China in 2009 and ID-IV in Australia in 2013. ID-V is envisioned to be organized in Hyderabad some time in 2016 or 2017. It will be a great honor not only for ICRISAT or ICAR but for India as well to host this prestigious conference.