In a scientific breakthrough that promises improved grain yields and quality, greater drought tolerance and disease resistance, and enhanced genetic diversity, a global research team has completed high-quality sequencing of not one but ninety genomes of chickpea. 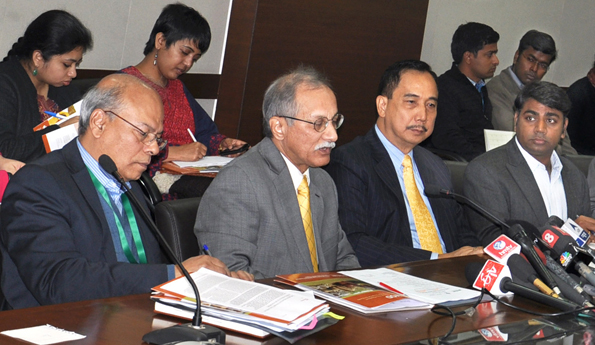 Nature Biotechnology, the highest ranked journal in the area of biotechnology, featured the reference genome of the CDC Frontier chickpea variety and genome sequence of 90 cultivated and wild genotypes from 10 different countries, as an online publication on 27 January 2013. The paper provides a map of the structure and functions of the genes that define the chickpea plant. It also reveals clues on how the sequence can be useful to crop improvement for sustainable and resilient food production toward improved livelihoods of smallholder farmers particularly in marginal environments of Asia and sub-Saharan Africa.

The research milestone was the result of years of genome analysis by the International Chickpea Genome Sequencing Consortium (ICGSC) led by ICRISAT, involving 49 scientists from 23 organizations in 10 countries.

The global research partnership succeeded in identifying an estimated 28,269 genes of chickpea after sequencing CDC Frontier, a kabuli (large-seeded) chickpea variety. Re-sequencing of additional 90 genotypes provided millions of genetic markers and low diversity genome regions that may be used in the development of superior varieties with enhanced drought tolerance and disease resistance. This will help chickpea farmers become more resilient to emerging challenges brought about by the threat of climate change. The genome map can also be used to harness genetic diversity by broadening the genetic base of cultivated chickpea genepool.

“ICRISAT and its partners have once again demonstrated the power of productive partnerships by achieving this breakthrough in legume genomics,” said Director General William Dar.  “Under the CGIAR Research Program (CRP) on Grain Legumes led by ICRISAT along with other CGIAR Consortium members and program as well as national partners, genome sequencing will play a crucial role in speeding up the development of improved varieties for smallholder farmer crops such as chickpea.”

“In the face of growing global hunger and poverty amid the threat of climate change, the chickpea genome sequence will facilitate the development of superior varieties that will generate more income and help extricate vulnerable dryland communities out of poverty and hunger for good, particularly those in the drylands of Asia and sub-Africa for whom ICRISAT and our partners are working,” Dr Dar added.

“Genetic diversity, an important prerequisite for crop improvement, is very limited and has been a serious constraint for chickpea improvement. This study will provide not only access to ‘good genes’ to speed up breeding, but also to genomic regions that will bring genetic diversity back from landraces or wild species to breeding lines,” explained Dr Rajeev Varshney, coordinator of ICGSC and Director – Center of Excellence in Genomics, ICRISAT.

“Currently, it takes 4-8 years to breed a new chickpea variety. This genome sequence could reduce by half the time to breed for a new variety with market-preferred traits,” he added.

Highlighting the importance of the research, renowned agricultural scientist Prof MS Swaminathan, Member of Indian Parliament, said, “I would like to compliment the excellent scientific work done by Rajeev Varshney of ICRISAT and his colleagues in developing a high-quality genome sequence of chickpea. I am confident that the knowledge provided by this study will help accelerate the improvement of this crop through marker-assisted breeding.”

Recognizing the efforts of the global research team, Mr Ashish Bahuguna, Secretary, Ministry of Agriculture, Government of India said, “Decoding of the chickpea genome would facilitate the development of improved varieties with higher yields and greater tolerance to biotic and abiotic stresses. This would help chickpea farmers to increase productivity, reduce cost of inputs and realize higher incomes.” He added: “This development is of great importance to India, the largest producer and consumer of chickpea.”

Highlighting the importance of the breakthrough to India, Dr Swapan Datta, Deputy Director General – Crop Science, Indian Council of Agricultural Research (ICAR), said, “The chickpea genome sequence is expected to help in the development of superior varieties with enhanced tolerance to drought and resistance to several biotic stresses. India will benefit most from this genome sequence, our country being the largest producer of chickpea. This, in my opinion, is by far the most significant collaboration between ICAR, ICRISAT and the global genomics community.”

Drs Dar and Varshney addressing the media during the press conference.

According to Professor Jun Wang, Director of BGI, “The collaboration between BGI and ICRISAT has yielded significant achievements in orphan crops research, like the pigeonpea genome before and now, the chickpea genome. I believe that our partnership will revolutionize research on orphan crops, which are key staple crops in many low-income countries and are extremely important to smallholder farmers worldwide.

“The importance of this new resource for chickpea improvement cannot be overstated. This genome sequence will provide the basis for a wide range of studies, from the important goal of accelerated breeding, to identifying the molecular basis of a range of key agronomic traits, to basic studies of chickpea biology,” said Professor Doug Cook from the University of California-Davis, USA.

“Making the chickpea genome available to the global research community is an important milestone in bringing chickpea improvement into the 21st century to address nutritional security of the poor – especially the rural poor in South Asia. We look forward to seeing how researchers around the globe will harness this resource to increase chickpea productivity against the backdrop of climate change in the developing world,” according to Dr David Bergvinson, Senior Programme Manager, Science & Technology, Global Development, Bill & Melinda Gates Foundation.

The chickpea genome sequencing project was undertaken by the ICGSC led by ICRISAT, the University of California-Davis (USA) and BGI-Shenzhen (China) with key involvement of national partners in India, USA, Canada, Spain, Australia, Germany and Czech Republic.